She is an artist to watch out for. Ranjeeta comes from a small village in Bihar called Mokama. A place she remembers not just for its hard life, but also for its fading golden mustard fields. Her journey from that little village to where she is now, in the gruff vibrancy of the city, chronicles the inspirations of her art. There is the drudgery of poverty, the falling blocks of agriculture, the paradigms that shifted when farmer became labourer and when the artisan became the concrete mixer. The currency today is not the land that is tilled but the land that can be built. Her art traces the timelines of these crumbling, rebelling, surviving, but never-thriving, demographic.

Her work on gender roles feels like a confessional of these invisible lives. It is their story that she brings forward. It is a voice of mud, terracotta, stitches, humility, suffrage and acceptance. There is less protest and more reality and more poignancy than polish in her art. Her work seeks you out and makes you look into places you are tuned to ignore in the everyday. The parts of the newspaper you are toughened to ignore – farmer plights! Living conditions of labourers! Women’s rights! Constitutional rights! Ranjeeta’s work is about those marginalised. She takes us into this necessary world and makes us understand our nonchalance. That is where her art really triumphs.

The donkey has travelled in the world of mythology and literature from the time of God. In the Bible, Joseph and Mary rode into the city on a donkey – a female (symbolically divine) donkey and not a male (symbolically satanic) donkey. Even king Midas of the golden touch was cursed with donkey like ears. Donkeys became the work animal instead of its cousin, the horse, who was made for glorious wars and magnum opus movies. Literature termed donkeys as stupid and stubborn and later as loyal and hardworking. This beast of burden in Ranjeeta’s series is a metaphor of the labourers, of gender and identity. She sees not just the toils of a class but the roles women play. She sees a self-portrait and those of many like her.

This is about the workers who build our world. People who live on the fault lines of our society. Ranjeeta stacks up their life in the sweat-soaked and shrouded fabric of their occupation. The turban for heavy loads. Its use transcends this singular function. It is headgear, umbrella, towel, blanket, cradle. It is a loyal partner to their every toiling moment. Ranjeeta says, “It’s called the Vinda”. She collected these from workers for three months. Delighting them with new turbans in exchange of their torn ones. They shared their stories with her. Unseen City features an installation of Vindas forming a skyline, much like a city to tell their unique story. One can experience the stacked turbans of a soulless city along with the recordings of its forgotten, unseen aspirants.

The artist draws our attention to the farming lands that are turning urban. Villages, identified as tier-3, tier-4, tier-5 cities. She grabs our attention with the morphing bricks. One sees the transition of millets to concrete in these blocks. She created this work with a nearby village in mind. It was a village of millet fields which were slowly ceasing to exist to become just another city. The grains that feeds the many turning to bricks that hold a few. 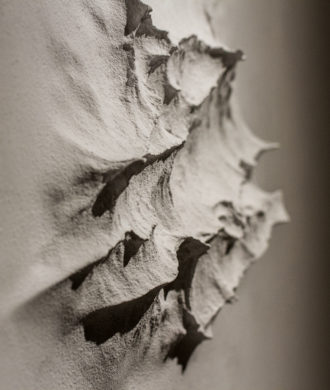 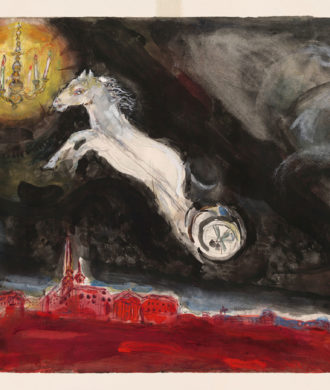 Chagall: Fantasies For The Stage